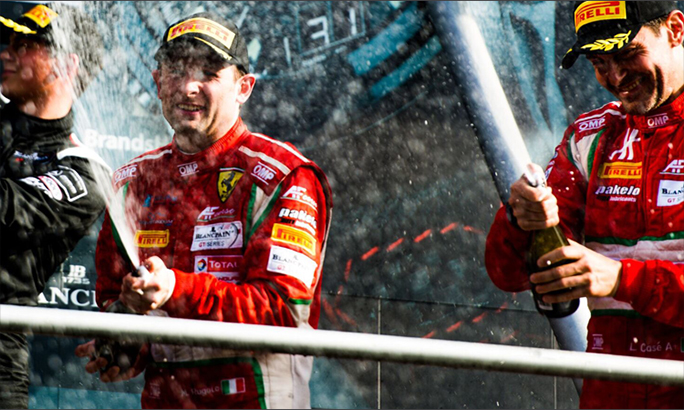 Driving the #55 Ferrari 488 GT3 alongside team-mate Lorenzo Case, this was Quaife’s first race at the Brands Hatch Grand Prix circuit for 10 years and his first experience of the historic circuit in GT3 machinery, despite his family home being less than 15 minutes away from the circuit in Kent.

Aiming to bounce back after a frustrating first round at Misano, Quaife spent practice dialling the car in and getting as much mileage as possible.

In qualifying, the 31-year-old set the third quickest time in class and although he struggled to find the optimal set-up, the 2016 International Endurance Series TCR champion was still the second highest-placed Ferrari overall.

Quaife made a good start to the Qualifying Race as he matched the leaders on pace, but as his stint wore on he struggled with a lack of grip. Case had similar issues during his stint, but both drivers managed the race well to score their first class podium of the campaign with third.

Further set-up changes were made prior to the second race and the car was transformed. Case, who took the start, made good progress during his stint before handing over to Quaife. The Brit expertly battled his way through the 31-car field and secured an excellent second place in class.

This result sees the #55 AF Corse pair climb to third in the Silver Cup standings, with Quaife hoping for even better next time out in the third round of the Blancpain GT Series Sprint Cup at Zolder, Belgium (2-4 June).

Phil Quaife said:  “I hadn’t actually raced on the Grand Prix layout at Brands Hatch for 10 years, which is pretty crazy considering how close it is for me! This weekend gave me a chance to dial into the circuit and also get used to the Ferrari 488 GT3, with the limited running I had prior to the weekend. Brands is narrow, fast and undulating, so you really get a great sense of speed, it’s amazing in one of these GT3 cars, especially the Ferrari!

“The first seven laps felt really good in race one and despite struggling for grip later in our stints, Lorenzo and I managed to hang on to secure a class podium with third.

“Ahead of the Main Race we worked really close with the engineers to improve the set-up and what a difference it made! The car was exactly where we wanted it to be and felt great to drive. I was trading lap times with the frontrunners and was able to challenge the guys ahead. We went on to score another Silver Cup podium, with second in class.

“Now I look forward to the third round at Zolder. If we can get the set-up right earlier in the weekend and put in a good qualifying performance, I’m confident we’ll be able to have an even better result. The guys at AF Corse have been incredible, so I’d like to give them a massive thanks and also to my team-mate Lorenzo, we all have high hopes for the rest of the season!”